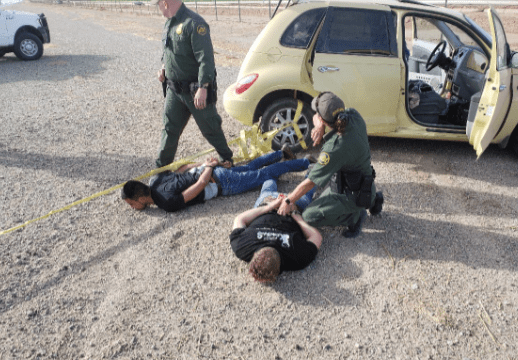 Border Patrol agents assigned to the Calexico Station on Sunday were the first ever within the United States Border Patrol to use an innovated vehicle immobilization device to stop a smuggling vehicle.

Agents responded to the area and witnessed a vehicle matching the description driving eastbound on interstate 8. The vehicle then drove across the median and began to travel westbound. Agents attempted to perform a vehicle stop but the vehicle failed to yield. Additional agents responded with a vehicle immobilization device known as a “Grappler”.

After a short pursuit, the Grappler successfully stopped the PT Cruiser without further incident.

The driver and passenger will be held in custody pending criminal prosecution.

The four Mexican citizens will be held as material witnesses. The use of this new version of vehicle immobilization device was the first recorded within the United States Border Patrol. To understand how the Grappler functions, check out this video link: https://policebumper.com/ To view original article click here